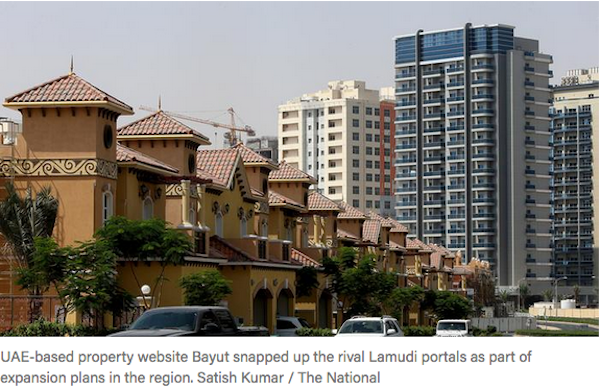 “With a network of sites operating in the region, we are very well placed to maximise consumers’ reach and clients’ exposure across a broader region,” said Haider Khan, founder and chief executive of Bayut.

The company launched Lamudi.sa as the first real estate portal in Saudi Arabia in 2012, followed by Lamudi.jo in Jordan. The UAE version Lamudi.ae went live in 2015. Under the deal, Bayut will take ownership of all of Lamudi’s assets in the GCC.

The acquisition of Lamudi Middle East provides “the ideal platform for Bayut to expand its footprint in the GCC”, especially in the kingdom – the Arab world's biggest economy.

“Bayut has always focused on providing the most locally-tuned solution to the market and the intention behind this acquisition is to take that philosophy to the greater GCC region, with a focus on Saudi Arabia,” Mr Khan added.

The acquisition comes after Bayut’s parent company Emerging Markets Property Group (EMPG) closed a $100 million investment round in February – its largest fundraising round following a $50m round last year.

In addition to Bayut, EMPG owns and operates Zameen.com in Pakistan, Bproperty.com in Bangladesh and Mubawab.ma in Morocco.

The Bayut and Lumadi deal comes amid rising mergers and acquisitions activity among the UAE’s real estate portals. On Monday, Dubai-based Property Finder announced it will buy rival platform JRD Group for an undisclosed sum. Property Finder also increased its stake in Zingat – the second largest property portal in Turkey – to almost 40 per cent earlier this month.